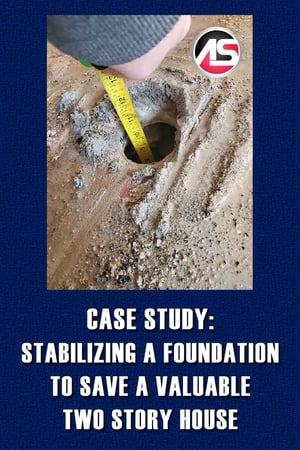 The owners of a valuable one-story house in New Jersey decided to add a second story to the structure. Unbeknownst to them (and to the contractor who worked on the project) four feet of the soil beneath the foundation had been poorly compacted by the home builder. When the second story was added, the soil could not support it and the foundation was critically damaged. The foundation issue caused the structure to shift a bit, which then caused roof damage as well.

When the contractor attempted to replace the roof, rainwater infiltrated the structure, eventually reaching the poorly compacted soil beneath the foundation and creating voids. These voids further destabilized the entire structure. Talk about a problem going from bad to worse! By this point, the residents had been forced out of their home for about a year! The general contractor then contacted LJS Waterproofing for assistance. A contractor in New Jersey with extensive soil and foundation stabilization experience, LJS quickly arrived on the scene and took immediate action to remedy the situation.

The LJS crew used Alchemy-Spetec’s AP Fill 700 high-strength soil stabilization grout to solidify the four feet of poorly compacted soil beneath the foundation. This polyurethane resin was the ideal choice because of its ability to thoroughly permeate the soil and then cure to an incredibly high compressive strength. LJS used Alchemy-Spetec’s PolyShark grout pump to install the material. This pump is specifically designed for large-scale soil stabilization jobs.

The crew used a Geoprobe pipe driver to insert grout injection pipes four feet deep into the supporting soil around the house. AP Fill 700 was then injected to stabilize the soil. They also used a carbide drill bit to create small 3/8” drill holes in the concrete foundation slab in a diamond pattern, 4 feet on center. After each drill hole was created, the crew inserted a pipe through the slab and into the ground, pumping the grout to stabilize the soil and fill the voids.

LJS completed stabilization of the entire foundation in just two weeks, ending a year-long cycle of compounding problems for the structure. This allowed the general contractor to repair the foundation, finish replacing the roof, and replace the damaged flooring with no further issues. Most importantly, the beleaguered residents were soon able to move back into their house after an exhausting, year-long ordeal.